It's Over Johnny. IT'S OVER!

Some things are over. Screwing with the IMDb Top 250 list has to be one of them.

Because of you. It's seriously all your fault. It was a good list, and then morons like you screwed it up. Here's how you did it.

One day, you typed in the name of a popular movie on Google, to see the reviews for it. Without a doubt, you probably got a link to IMDb at that point. Viewing IMDb for the very first time is a pretty rewarding experience. You can see recommended films, and view how other people vote on new and old releases.

On the side menu, there is a link to a Top 250 Film List that basically ranks out the highest rated movies for all of IMDb. It was a pretty good guide to seeing classic movies that you would have been sure to enjoy. That is, until you ruined it on us. 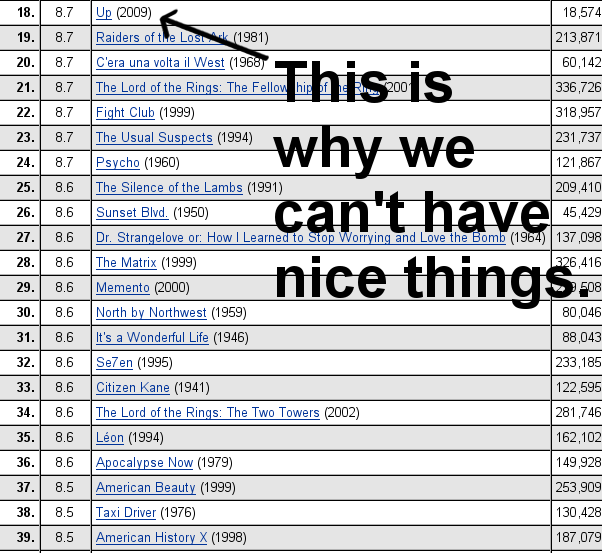 Up is better than Raiders of a Lost Ark? It even outranks Jaws, The Usual Suspects, Taxi Driver, and countless other films that have been pushed off of the list to make room for this trash.


What You Can Do To Help

Stop voting 10 on new movies. Just cut it out. Don't do it. Think to yourself before you vote. Was that movie really a 10? Is a children's movie about a house that floats with balloons really one of the best movies you have ever seen in your life? If you answered yes, closedown your IMDb account right now and stop shitting it up for the rest of us.

Don't just impulse vote after you see something. When you vote, think about what it was rated on a scale of 1 to 10. It's not a choice between 1 and 10, there are numbers inbetween for a reason. If you're voting a 10, it better be the end all of awesome films that you have ever seen in your entire life. If you're voting a 1, it better be so horrible they won't even show it on tv at 3 in the morning.

Your vote has a huge impact. When you vote something like the new Star Trek film to number 94 on the list, you're not doing anyone a favor. A good movie that doesn't get as many recent votes is going to get bumped off the list when you vote that recklessly.


What IMDb Can Do To Help

The list is broken. More people are getting online and finding out about IMDb, which doesn't have to be a bad thing. The new users seem to just vote on movies they recently saw in theatres. Currently the list claims to not count votes from newer users, but it's not helping. The list is also supposed to adjust itself according to time, but newer movies tend to stay on the list and just push classic films off.

Put a time limit on movies. It should be about two years. All votes during the first two years a movie is released do not count. If after two years, people are still voting on the movie, then it deserves a spot on the list. All of the classic films on the list had a much more difficult time being recognized. In order for any of those movies to be on the list, a user had to remember the name of a movie they enjoyed, search it, and then vote on it. This is very different than going to the theatre and voting 10 on a movie you just saw because it made you laugh a few times.

In a couple of years, you won't remember that movie. You might own the DVD, but you never watch it anymore. If it's on tv, you don't bother waiting through the commercials to finish it. That movie didn't deserve it 10. A movie that deserves a 10 should be able to last longer than the hype that surrounds it during release, and the list should reflect that. I have no problem with good movies that recently came out being on the list, but they should have to earn their place just like everyone else did.